Mark Wayne Adams was inspired to chase his entrepreneurial dream in the 3rd grade, selling drawings to classmates. Creating books and inspiring others has always been his passion. Mark’s ability to produce quality illustrations at a fast pace and dedication to mentor others has made MWA, Inc. both successful and unique. In the past five years, his authors have won over 30 book awards and he continues to create new, successful products annually.

Mark contributes his talents and time to the community locally and nationally. He promotes reading and writing via public speaking engagements, book signings and participation in book events from South Florida to Ohio. He has been recognized through the Kentucky Governor’s School for the Arts, KACo (KY Assoc. of Counties), FAPA Board, SCBWI, IBPA, and national book awards. He also volunteers his talents to the Kids Need to Read annual calendar and donates books to various organizations.

Down Under: Kussins is the second book in M.W. Adams’ award-winning Family Tree Novel series. Readers are introduced to a variety of Australian, American, and Qweepie vernacular through the novel series. Choose to adopt or to adapt these terms using the “Language of the Outback” glossary included.

Charles Ghigna, also known as Father Goose, is an award-winning poet, children’s author, speaker, and nationally syndicated feature writer. He is the author of more than 5,000 poems and 100 books. His books have been featured on ABC-TV’s “Good Morning America,” PBS, and NPR. Ghigna’s poetry has appeared in The New Yorker, Harper’s, Highlights, and Cricket, and has been widely anthologized.

He served as poet-in-residence and chair of creative writing at the Alabama School of Fine Arts, taught English and creative writing at Cypress Lake High School, Edison College, and Samford University, was poetry editor of The English Journal for the National Council of Teachers of English at Florida State University, and a nationally syndicated columnist for Tribune Media Services. He is the recipient of grants from the National Endowment for the Arts, the Rockefeller Brothers Fund, and the Mary Roberts Rinehart Foundation. He has appeared at hundreds of schools, colleges, conferences, libraries, and literary events throughout the United States, England, France, and South America.

Did you know that an archerfish can spit water up to 16 feet? Or that the giant weta is the world’s largest and heaviest insect? Animal Planet’s fascinating exploration of animal oddities introduces young animal lovers to some of the most astonishing, gorgeous, and obscure animals in the world-including some brand new discoveries! Packed with more than 200 vibrant photographs and fun facts about animals with unusual behaviors, strange appearances, and remarkable stats, this deluxe book is perfect for reluctant readers or anyone who loves totally gross and amazing animals.

Dr. Bruce Kessler is in his fifth year as head of the WKU Mathematics Department and is in his 26th year as WKU faculty. He has always taken nontraditional routes to engaging students in mathematics, and once hosted a WKYU television show, “Math Matters: Why Do I Need to Know This?”. He has been writing and sometimes illustrating Operation Comics since Spring 2009. Dr. Kessler also a part of the local acoustic band Mt. Victor Revue, which has been featured on the WKYU program “Lost River Sessions.”

In this seventh issue, Wonderguy has his hands full with some devious bank robbers that think that they have outwitted the hero. But outwitting his math-minded sidekicks Claire and Dillon is not as easy as it looks. In this issue, the mathematical concept of “Gauss’s trick” is introduced, which is a way of adding consecutive whole numbers with one multiplication and one division.

Gail Nall lives in Louisville, Kentucky with her family and more cats than necessary. She once drove a Zamboni, has camped in the snow in June, and almost got trampled in Paris. She grew up figure skating, and her very first job was serving nachos and renting out skates at the local rink.

She didn’t rediscover her love of writing until law school, when she could often be found typing away on her first novel in the law library instead of working on her Constitutional Law outline. After graduating from law school, Gail worked as a personal injury attorney and a business law attorney. She currently writes grants for a local homeless shelter. When she’s not writing or at work, she’s taking care of her young daughter, reading, planning travels to amazing places, camping, watching too much TV, skating, and avoiding cleaning her house.

When Maya’s parents sell their house and move the family into the world’s ugliest RV to travel the country, Maya’s only goal is to get back home — and fast. No way is she going to miss the chance to audition for Dueling Duets, the singing competition show that’s going to surely propel her—and her cowboy-hatted crush—to country stardom.

But Operation Maya Goes Home turns out to be more complicated than she had expected, so Maya sets out on a secret 100-mile bike ride through Yellowstone National Park with her know-it-all little sister, a cute nature-loving boy, and a blue-haired girl named Shiver (a.k.a. the most annoying person ever). Somewhere between the worst muscle ache she’s ever had and losing half of their group to a flat tire, Maya starts wondering if maybe, just maybe, it’s possible to find home in the last place you expected. 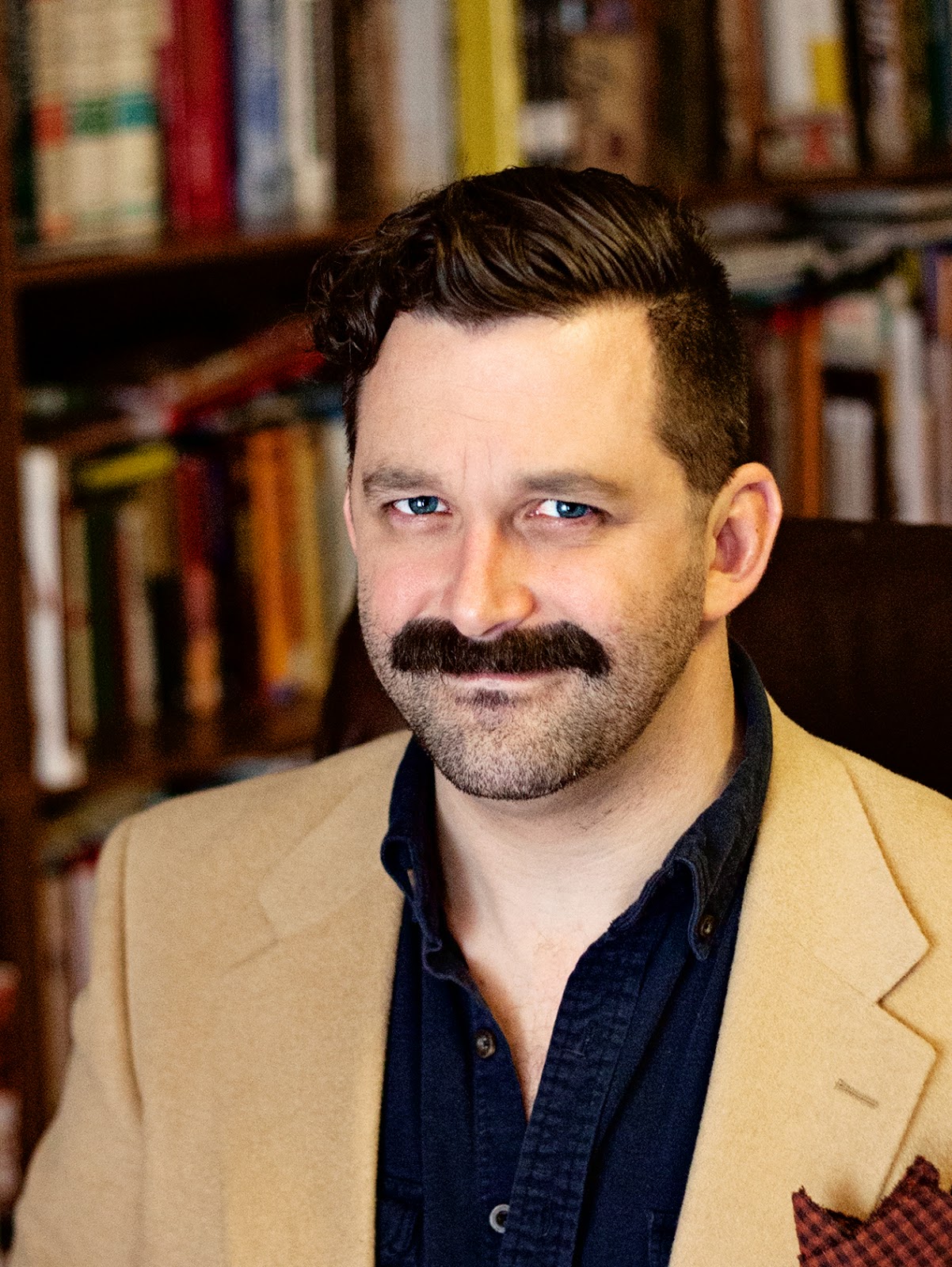 Chris Schweizer was born in Tucson, AZ at the tail end of 1980 to parents who are both classical musicians. He received his BFA in Graphic Design from Murray State University in 2004, and his MFA in Sequential Art from the Savannah College of Art and Design in Atlanta, where he went on to teach for five years.

He is the author and artist of The Crogan Adventures, a historical fiction graphic novel series that has been nominated for two Eisner Awards, a CYBILS award, and the YALSA list, and The Creeps, a middle grade mystery/horror graphic novel series. He now spends all of his time making comics, and lives in Kentucky with his wife and daughter.

The Creeps are in trouble, again. When rule breaking during one of their investigations lands the detectives in “service detention,” the four friends find themselves lugging pumpkins off a foreclosed pumpkin patch. To thank them for their service, Sheriff Obie allows each Creep to take home a pumpkin to carve into a jack-o-lantern. Bad idea. Once carved, the jack-o-lanterns come to life—and attack everyone within reach! It turns out the pumpkins came from a cursed patch, and to stop the Attack-o-Lanterns from destroying their town, the Creeps will have to team up with the patch’s unpleasant owner, Old Lady Bitterwood, who just might be a witch.

Lois Sepahban lives in Kentucky, but grew up in central California. Her family moved around a lot, but during her early years she lived in the Tehachapi mountains that form the southeastern boundary of California’s Central Valley. She spent her childhood climbing trees, reading books, and creating maps and leading her brother and sister on hunts for buried treasures.

She studied literature in college and became a teacher, and currently teaches middle school reading and writing and has written several books for the library/education market. Paper Wishes is her debut novel.

Manami is a ten-year-old girl, born on Bainbridge Island in Washington to Japanese parents. In March of 1942, following orders for relocation in Executive Order 9066, Manami and her family and the entire Japanese-American population of Bainbridge Island, are sent to Manzanar, an internment camp in central California. On the day they are to leave their island home, Manami is distressed when she learns that they are leaving her dog behind, too. When no one is watching, she hides her dog inside her coat. She manages to sneak him onto the ferry that takes them to the mainland, but a soldier spots him before she can board the bus that will take them to the train station. What happens next causes Manami to stop speaking. At the camp, it is up to Manami to hold her family together. And she can only do that by learning to speak again

Lauren Tarshis often wonders how she came to spend most of her waking moments thinking about disasters, as the author of the children’s historical fiction series “I Survived.” Each book takes readers into the heart of history’s most thrilling and terrifying events, including the sinking of the Titanic, the Shark Attacks of 1916, Hurricane Katrina, the bombing of Pearl Harbor, the San Francisco earthquake, 9/11, the Battle of Gettysburg and many more.

Lauren conducts extensive research to bring her topics to life. She has traveled to most of the locations where her books are set. Her goal is to open readers’ eyes to new chapters in history and to inspire them with stories of hope and resilience. Lauren is also the author of the the award-winning Emma-Jean Lazarus Fell Out of a Tree, and is the editor of Storyworks Magazine.

Gripping true stories of real people who have survived horrifying disasters from the author of the New York Times-bestselling I Survived series!

The author of the New York Times-bestselling I Survived series brings us four more harrowing true stories of real people in the midst of horrible disasters. From 11-year-old Bennett Satterlee and his brother Ethan who survived the 2011 Joplin Tornado, to an experienced skier in Alaska who was caught underneath the weight of a terrible avalanche, to 14-year-old Ariel Creamer whose home was right in the path of Hurricane Sandy, this is a collection of unforgettable narrative non-fiction stories of unimaginable destruction — and, against all odds, survival.

Kristin O’Donnell Tubb is the author of John Lincoln Clem: Civil War Drummer Boy (written as E.F. Abbott), The 13th Sign, Selling Hope, and Autumn Winifred Oliver Does Things Different. In June, watch for A Dog Like Daisy, a story of rescue told from a service dog’s point-of-view. Kristin lives near Nashville, Tennessee with her bouncy-loud family. Just like her two dogs, she can be bribed with cheese.

Would you ever run off to join the army, leaving your family behind? That’s what nine-year-old John Lincoln Clem does in 1861.

Determined to fight for his country, Johnny sneaks onto a train filled with men from the 3rd Ohio Union Regiment. Taken in by the older soldiers, Johnny becomes a drummer boy, and later, takes up his own musket. As the war rages on, Johnny experiences the brutalities of battle as well as the rampant illness and gnawing hunger in between. But the most dangerous part of Johnny’s journey is yet to come.

Based on a True Story books by E.F. Abbott are exciting historical fiction about real children who lived through extraordinary times in American History. This title has Common Core connections.